The month in which Book Bingo was started at the library as a reading challenge for grown-ups. The first three books were read before this and so don’t count in the line.

John Marrs- When you disappeared- Perfect family man Simon vanishes  early one morning, his wife Catherine and children are devastated. Twenty five year later he turns up on the doorstep. What happened is told by Catherine and Simon. I did find part of the ending upsetting and skipped three pages, apart from that it was a jolly good thriller.

Neil Spring- The Ghost Hunters- based on the exploits of one Henry Price and his investiagtion into the  most haunted house in England-Borley Rectory. The novel is very well done, his use of language and style really evoked the age in which the book is set- 1920’s till 1970’s, with most happening in the 20’s- 40’s. A perfect book for a Halloween/ Autumn read. I always think I have a good book on my hand when I break off to google something- here’s a link. There was also a TV series starring Rafe Spall, should it sound familiar to you. It was a good read.

Phaedra Patrick- The Library of Lost and Found- A nice, cosy and quite charming feel good story. Martha is a volunteer at her local library and never says No. So she’s put upon. A book comes into her possession with a note that it’s for Martha from her Nana , but the date is three years after her Nana died. This would make a lovely stocking filler at Christmas for someone….. On the negative side, the writing is not great   and clearly the author has never volunteered in a library! But hey, it is set around books, so that’s good.

So here’s where Book Bingo started, which means I had read the above before…

Rowan Coleman- The Girl in the Window- published in August 2019,  by a woman,  recommended to me and it’s a mystery, so lots of potential ticks. It is also very good indeed. A blend of historical and modern, fact and fiction. Trudy’s husband is missing so she and her son return to the house she grew up in -Ponden Hall. It’s a real house and is now a B&B. There is a Bronte connection to the house. The Bronte family were invited to make use of the library, and the son Robert Heaton had a soft spot for Emily and planted a pear tree as a sign of his devotion. The house may have inspired several houses in the novels, from Wuthering Heights, to Thrushcross Grange and Wildfell Hall. Trudy finds various papers written by Agnes Heaton in the 17th century and by Emily Bronte. Agnes’ story  seems to have inspired Emily to write a second book, one that is missing. That’s all I’m saying because a mystery wouldn’t be a mystery if I spilled the beans. It’s good though.

Susan Orlean- The Library Book- qualifying as non- fiction and a recomended book for my bingo cards. The library is the Central Library in Los Angeles, and covers a lot of different angles, including the history of this library and libraries in general across the world, the people who work, volunteer and use this library and the story behind a fire in Central library. I found it abasolutely riveting, but then I probably would. The library I volunteer in is nothing like central library and yet I could reognise the tales she related about library users, volunteers, books and all the other things that happen in a library.We should really value our libraries, not just for the books we can borrow but for all the other things you can do in a library and for the human contact it provides to people.

Nella Last’s war- edited by Richard Broad and Susie Fleming. Did you see Victoria Wood’s TV drama called Housewife 49? This is the book which inspired the drama. Nella Last started to keep a diary for Mass Observation at the beginning of WW2, and kept it going throughout the war and beyond. It is so good. Honest history, written as it happened, telling what life was like for ordinary people in Barrow. Nella is in her early 50’s with two grown up sons, and has always been a stay at home wife and Mother. We see her gradually becoming her own person, working in the Centre, endlessly sewing and  knitting, and opening a charity shop for the Red Cross to pay for all the parcels for POWs. She keeps chickens, cooks wholesome meals, her husband actually starts to complement  his meals, she thinks for herself, has bouts of anxiety, worries about her sons, suffers from arthritis, puts on a brave face so everyone thinks she is cheerful all the time. She is fabulous. The book should be compulsive reading in schools! Don’t take my word for it read it, or have you already, were you impressed. There were a couple of bits that grated, but you have to recall the zeitgast.

Madeline Miller- Circe- Huge thanks to people who recomended this one to me. I loved it. A retelling of greek myths through the story of Circe, a witch , a goddess, and one time lover of Odysseus. So good to read a story with a powerful female hero. It also reminded me of these myths which I had read at school and had mostly forgotten.

So I am 4/5ths of my way through the central line on my bingo card. The only one left for that row is the Free Space, by which I take it to mean my choice. I’d like to thank everyone for all their ideas for me, I followed up on so many of them I actually have 12 books from the library waiting for me to read. Three of which have to be returned by 7 November as someone else has requested them. Better get reading…

Love to know if you have read any of these, did you like them? Have you read a good book this month?

The Beauty before the Fall.

Confession time, not everything is scrap in my project and I took inspiration off the internet and have no idea who to credit the idea too. But thank you to them, and if anyone knows please let me know so I can give proper credit.

First take a wire ring and wrap with hessian.( I bought both of these).

Then raid the sewing box for items I know I will never use, are scraps or things I inherited from my Mum, my Mother in law and my Step Mum and are too pretty to keep hidden away.

The tape measure is ancient , and the pincushion I made and used from a magazine ( free gift) , washed ‘cos it got dirty and kept.

Add a ribbon – one I’d kept from some packaging.

A sewing memory wreath. The little dog contains needles with the tiniest of holes, I found that in my step Mum’s sewing box, not one has been used. Scissors are blunt. Threads I have duplcates of.

Linking with Kate for Scrap Happy,

Jumper fit for a Grandson.

I have a finish, and it’s in the post for my Grandson. 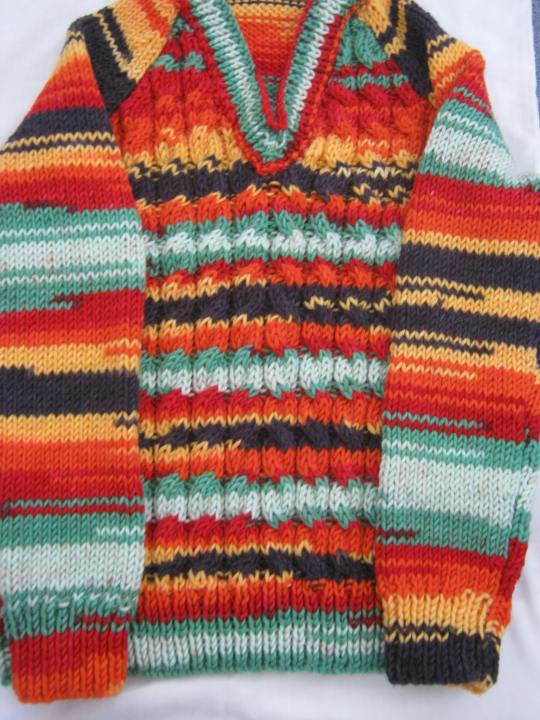 Rather pleased with how I managed to match the yarn around the v neck line. Right it’s Polar Bear time now.

That’s the box, I am knitting the right back leg, be a while I think. Love to know what everyone is knitting/ crocheting at the moment.

Complete a row of five books borrowed and read from the library, submit your card by 4 January and you will be entered into a prize draw. It’s open to everyone aged over 12 . Clearly designed to attract more book borrowing and teenage readers, age categories being 12-15, 16-24, 25-54 and 55 and over.

I look on it as a chance to read more books….. all in a good cause.

I also see it as a way of choosing books I wouldn’t normally give a second look at. And That’s where I would love some help from you please.

So any suggestions for the following?

You’ll note I missed some out, they would be my usual reading matter!

Please help, there is a category called book recommended by others, and I consider that ticked off already as most of the books I read are now recomendations left in the comments of my book posts, or your book posts. Meantime maybe your library is doing book bingo.

Wish me luck, and thanks.

Yarn and books sums me up quite well! Joining with Ginny for another yarn along post,  here 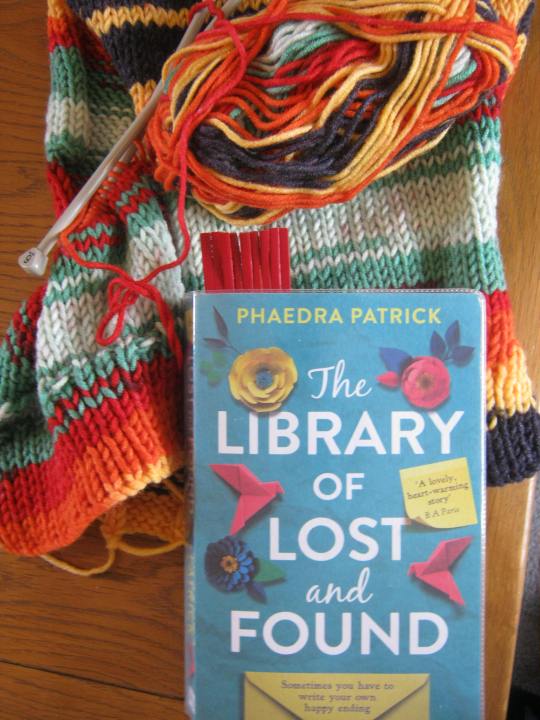 I am now on the second sleeve of the jumper for my grandson Master T. The book I have just started, so I will let you know what I think at the end of the month, but so far it’s shaping up nicely.

There’s been a bit of crochet happening too. I have now completed parts one and two of my Portugese Tiles blanket. 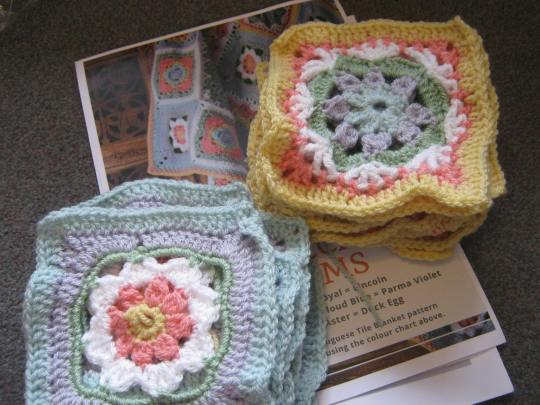 One pile of 9 and one pile of 8 blocks. Stitched together thus

The remainder of the blocks to be used later. Onto part three…

Do pop over to Small Things and see what Ginny and everyone else is making/ reading.

I am fond of stained glass windows. That’s an understatement, I love stained glass. My favourite of all time is not here in Yorkshire, or even England, but in Germany. The Kaiser Wilhelm Memorial Church with stained glass by Gabriel Loire, in Berlin, it just left me feeling completely overawed. The photos I took were pre digital camera days, so I took copies of the postcards I bought for this post. The link has much better pictures. 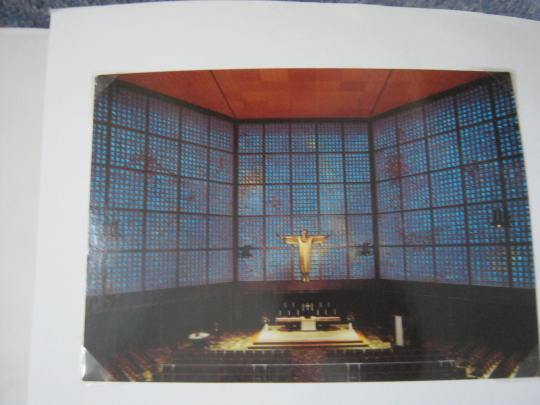 And as such do not do justice to windows at all. Have you visited this church? If you ever go to Berlin, this church is a must I feel.

We visited about 18/19 years ago , I forget. Anyway at the time I was studying on a City and Guilds Creative Embroidery course. These fabulous windows became the inspiration for some of my samples. 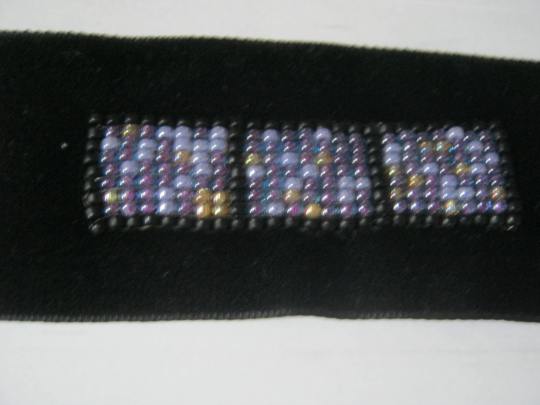